The last part of our adventure were the islands off the east and west coasts of Thailand. The next part of the journey was to make our way to the north of Thailand, travelling via Bangkok to get our visas for Vietnam. 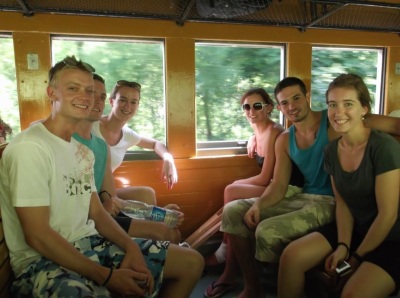 The last part of my story saw me limping my way off the Phi Phi Islands to catch the boat to the mainland and back to Bangkok.
By the time we reached Bangkok, I knew there was something wrong with my foot so I had to go and get it checked out. The result was a badly sprained ankle and a bacterial infection from the graze… I was so lucky I got it looked it. I once again limped away but this time on crutches, you know the ones that sit under your armpit…yeah! Those awful ones! I had to go back to the hospital every day to get my ankle looked at and redressed, thank god we had to wait a few days for our visas to be issued for Vietnam.
Being on crutches offered many different things! I got a piggyback a lot because I was so slow, always offered a seat and very sore arms! 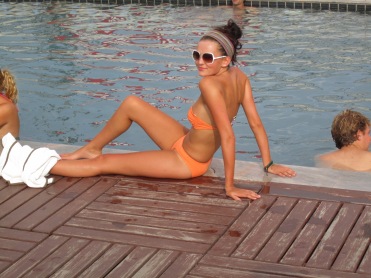 Anyway, I wanted to tick something off My Bucket List so we went in search of a day tour that might cover this.
In the end, we booked a tour that covered The Death Railway, Veteran Cemetery, Erawan Waterfall, The Elephant Village (Bucket List ticked off) & River Rafting.
Happy with out decision, we went for food and a few drinks (mocktails for me) and retired to bed in preparation for the long day ahead of us.

Thankfully we were picked up at our hotel and joined a group of 12.
It was a long day but a fantastic and enjoyable day!
The first stop was the Veteran Cemetery. We got a short talk about the history of the war and an idea of who was buried there, it was majority prisoners of war which was sad. 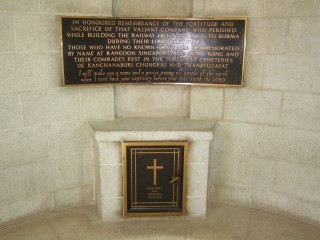 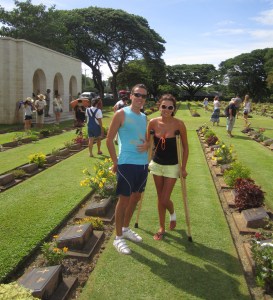 Next stop was a small town called Kanchanaburi. There was hustle and bustle from the market places and shops. We walked through one of the markets looking at the array of fruits and vegetables, pies and pasteries, some of which I had never seen before.
Kanchanaburi is known for the bridge constructed by the prisoners of war and labourers during the war and is still fully functioning. You can walk out on the bridge and you can move over to a standing platform if a train comes… I can’t imagine there never being an accident. The only thing I didn’t like about the town was the amount of animals held on chains, by this I mean small tigers. They could barely stand they were so sedated and tourists could pay to take a picture with them and feed them. I thought it was so cruel so I didn’t support it. 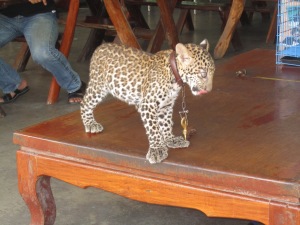 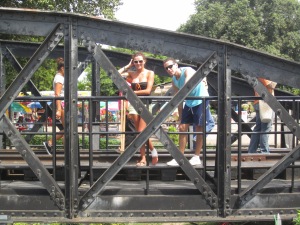 Here, we took a short trip across the Death Railway…by a slow train thankfully! It is probably the scariest train I’ve ever been on because everything creeks and you can fully open the windows to stare down to your death below you, great experience all the same. 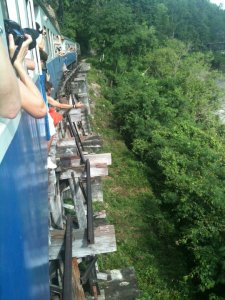 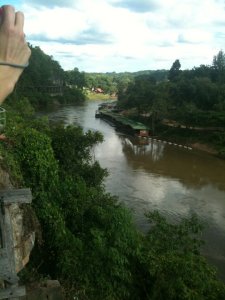 We left the town to go to Erawan Waterfall. To swim under a waterfall is on My Bucket List, so I don’t count this as complete because I literally had to be carried up to the waterfall (thankfully it wasn’t far) and sat at the side because I couldn’t allow my foot to get wet. 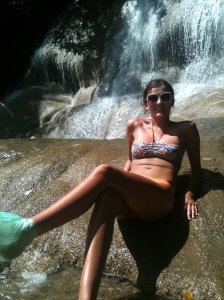 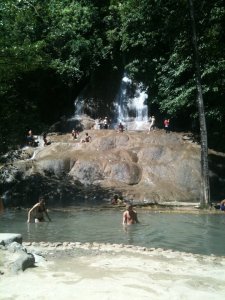 Last stop was the Elephant Village & River Rafting. This was also a tick off the list. The River Kwak Elephant Camp was another great part of the trip. The elephants were roaming around and looked comfortable and happy in their surroundings, not that I’m an expert, I just got that vibe.
As I was on crutches, I was advised to get on the back of a small elephant…no chance! My stubbornness arrived and I managed to get to the top. The elephant we choose had a baby elephant with her as we set off. The Elephant walked at her own pace and we made our way down to the river. The elephants happily walked along the edge of the river and were playfully sending a few bursts of water our way. 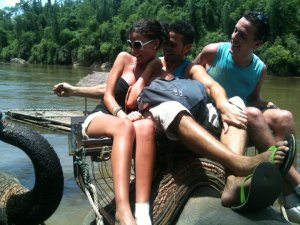 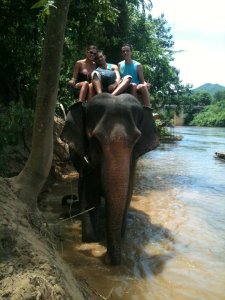 The River Rafting was up next. It was a calm trip down the river, I was worried I was going to get my foot wet but not in this case. It was a great way to end the day relaxing and reflecting on the day. 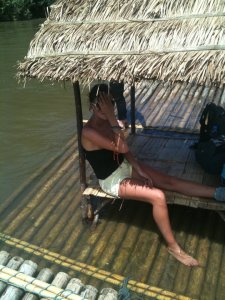 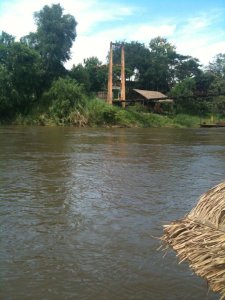 I was glad to get back to the hotel and settle in for the night!

The next day we got our visas for Vietnam and planned our transport to Chiang Mai and then on to Laos.