Layup café has been popping up on my social media accounts with colourful pictures of breakfasts and cups of coffee, of course, it got added to the list.

We choose to have a late breakfast around 12.30p.m on a hot Saturday afternoon. We took a seat at a small table by the window and took a look at the menu.

By the looks of things, there were only two waitresses on the floor and they were rather busy scurrying from table to table. The second thing I noticed was the heat, there was no air con on and the heat made our brunch experience quite uncomfortable. I went up to the front counter to get water which I couldn’t take to the table but took about ten minutes to get to our table, we were parched.

We were in the café about twenty-five minutes before our order was taken. I thought the items on the menu were very reasonably priced and it is nice to see this in a new establishment. I had decided on the Baked Eggs ($18) as I haven’t had such a breakfast in quite some time. I also ordered my usual Long Black w/milk. Mr. T liked the sound of the Guacamole & Pica de Gallo ($16).  He ordered an Orange Juice to have with breakfast.

About ten minutes later, our drinks arrived. My coffee was strong and a great caffeine hit. I believe it may have been a blend called Blacklist as there were bags of it on a shelf close to the front counter of the café. 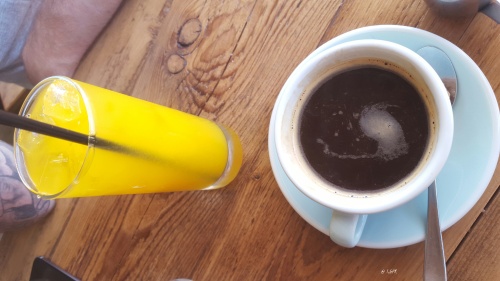 As we thought about our plans for the rest of the day, our breakfast dishes arrived to the table together. The presentation of my Baked Eggs reminded my of the breakfast I ordered at Addison & Steele, North Perth.

There were two slices of toast covering the baked eggs underneath and the slices were smothered with butter! Two of the three eggs were over cooked and a little rubbery to taste which was extremely disappointing. The chorizo was delicious, it was cooked in large chunks and there were quite a few pieces under the eggs. The dish was quite dry as there wasn’t much tomato, mainly what you see here. Overall, it was pretty average and I wouldn’t order it again.

Mr. T had quite the attractive fresh dish. This was similar to the Avocado Bruschetta Mr. T had at Cantina663 very recently.

Mr. T said that he really enjoyed the dish. The toast was smothered in dollops of creamy avocado and topped with freshly chopped tomatoes and red onion. The jalapeno custard added a little spice and lots more flavour to the breakfast. The corn was present but didn’t taste like it was smoked. Mr. T said it was nice considering the price and he would order it again with the addition of poached eggs. 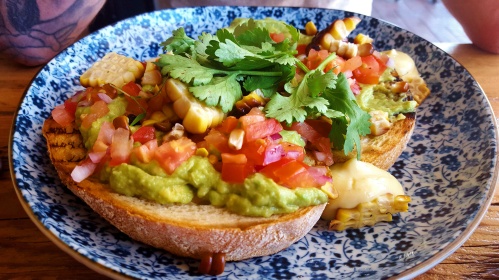 At the moment, there is quite a lot of hype about Lay Up but I found it quite average.

As it is situated in Northbridge, there is an array of better cafés close by. I would highly recommend Tarts for a tasty and pretty breakfast and the temptation of a take home cake before you leave. I would also recommend Sayers Sister for a lively atmosphere and a great coffee.