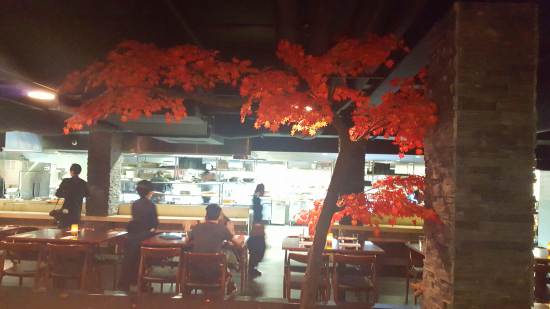 I was delighted to be invited to Sushia Izakaya to taste the newly designed set menu for Eat Drink Perth. As a food blogger, these are the nights you look forward to!

My first impression of the venue was amazing. I loved the layout and the intimacy of the bar and eating areas. The kitchen is open which is a beautiful feature as I love spying on the chefs as they are busy cooking.

On arrival, we were warmly greeted and served a cocktail…what a great start to the evening. We had half an hour to mingle together and begin our tasting with a few nibbles. The Beef Dumplings were delightful and my favourite of the canapés. The beef was well seasoned and tender, a perfect teaser for the menu we were all looking forward to. 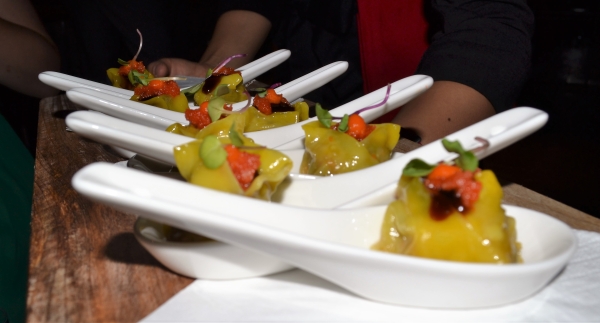 We were all seated on a long table that was beautifully set. When everyone was seated, the food began to arrive. As the first dish was served, the waitress explained the dish and pointed out element. My favourite of the Sashimi Trio was the third piece. It was a perfectly seared piece of beef topped with a ginger salsa and a tangy ponza sauce. I have never tasted kingfish before and I liked it, it had quite a strong flavour and a dry texture. The salmon, which is my personal favourite fish when ordering a fresh fish, was also stong in flavour and oh so fresh.

Next on the menu was the Creamy Jalapeno Pop Corn Prawns which unfortunately, I could not have so I had these two beautiful salmon skewers which I believe was the Sake Kushiyaki. The salmon on the skewers was cooked through and lost a little moisture so they were suitably dressed with a complimentary mustard miso sauce. The sauce was light in dressing and did not overpower the taste of the salmon.

Next course, was the main course. This  is called Robatayaki Pork Rib. There were a few sitting around me that named this the dish of the night. The pork itself was deliciously tender, the negative was that there wasn’t enough, I could have eaten all of the dishes myself. There was still quite a bit of fat that wasn’t rendered but the flavours packed into the pork made the dish. Under this was a bed of roasted vegetables. I am quite the sweet potato lover so I enjoyed this part of the dish also.

By now, I am feeling pretty full but there is always room for dessert! We were served a dish called Black Sesame Surprise. This was quite a heavy dish. The vanilla ice-cream was perfectly creamy and had a beautiful soft texture, it was full of flavour. The ice-cream sat on some lightly caramelised cashew nuts which added a little crunch to the ice-cream, I really enjoyed the combination of flavours. The black sesame was very heavy in texture and something a little lighter might have worked to follow the other filling dishes. There was chocolate on top snapped when I broke it, music to my ears but the cream got pushed to the side as it was another heavy element on the plate. I enjoyed this dish a lot and with a few minor tweaks, it has the potential to be perfect.

The dessert was matched with Choya Umeshu, Japanese Plum Wine. This was beautifully sweet but refreshing and as it was my first time tasting plum wine, I took my time and savoured it.

I honestly had a wonderful night sampling the menu, thank you Sushia Izakaya for the opportunity. I think Mr. T would really enjoy the food at Sushia Izakaya so I hope to make a return visit.