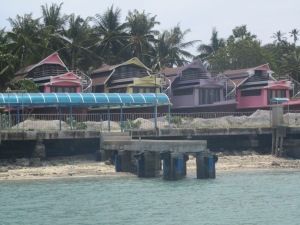 I thought I would share some of my travel experience through my blog and Thailand is an amazing place to start!

In the summer of 2011, the long journey was made from Ireland to Bangkok where we stayed one night before travelling to the islands. Our whole trip was planned around the Full Moon Party on the island of Koh Phangan.

We travelled by night-bus to a port where we boarded a ferry at Surat Thani to get to our first island, Koh Samui. The island was rather quiet and very wet, as always there were a few bars which were a little more lively. In Koh Samui, we went to our first ladyboy cabaret show…it was something I’ve never been to before. My company for the night was the two guys I was travelling with and I had to beg them to go, which they did… in the end!
The show was better than we all could have expected, the guys agreed and we all had a great night. One of the guys was invited on stage to sing as well…unfortunately there wasn’t a video for that performance! 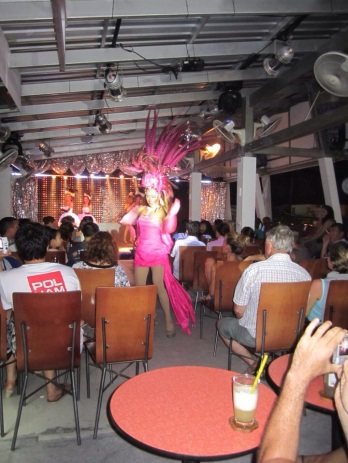 We thought the weather was how it would be on all of the islands but thankfully, as we got closer to Koh Phangan, the skies were blue and the sun was beating down!

We arrived in the madness that was Haad Rin. We thanked our lucky stars we weren’t staying there, it was absolutely nuts…that’s the only way to describe it!

Hadd Rin is definitely the party hub of the island and this is obvious as soon as you step off the boat!
We stayed in the north of the island in the beautiful and tranquil Bann Tai.

We stayed at the Starlight Resort. The hotel was small and simple. The pool was the winning factor, on the other side of the wall you stepped on to the beach..infinity pool! The beach was shared with two other hotels and was the front door to other restaurants and small businesses. Even though this was a shared space, it was always quiet and peaceful…the perfect place to relax, and that’s exactly what we were looking for at this part of our journey. 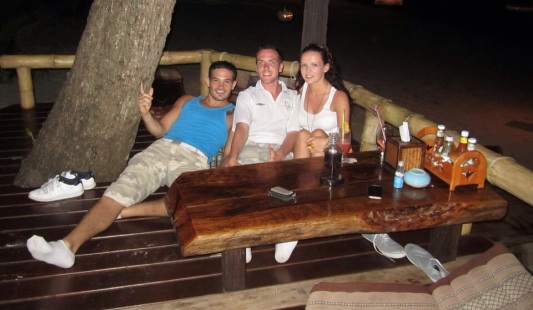 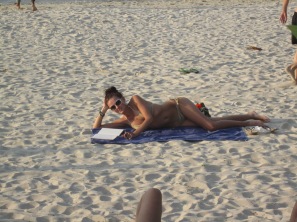 The first two days here were spent on the beach, in the bars and sipping on strawberry daiquiris as often as I could! Each night, there was something different on, from music to fire shows..we were definitely entertained. I loved the seating at the bars and restaurants. They were mostly on the floor, one bar even had swing seats suspended from the ceiling.

The village its self had more shops and restaurants to explore. It was a quiet village but the locals loved to meet tourists and improve on the English. There was everything you could need; moped rental, launderette, cafes, restaurants, shops, a chemist and small retail stores.

We didn’t rent mopeds (thankfully), the roads barely had a surface and the hills on the islands were so steep! As we made our way from Haad Rin to our resort, we came to a hill where only one vehicle could go up at a time. The bus literally had to take a run at it! We were lucky, our bus had a bit of boot!! There are also so many stories of tourists falling, breaking bones and paying a lot of money to replace damaged mopeds. 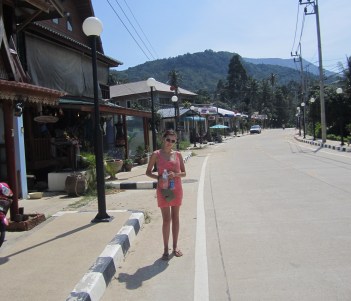 Then came the Full Moon Party! My first impression of Haad Rin was that it was crazy…that was an impression made during the day and night time was crazy on a completely different level! 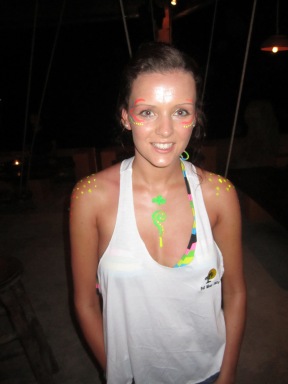 The streets were polluted with people, some were sober, some wandering aimlessly hoping to see someone they would know. Every bar was packed to the rafters and every party goer had a bucket in their hand! There were different types of music blaring from each bar and we were in the middle of it…. We had to join in! Each bucket was loaded with ice, alcohol of choice and a mixer..some buckets also had ‘Red Bull’ which we were told had ketamine ( we steered well clear of the ‘Red Bull’)

We decided we had enough of the streets and headed for the beach…after all, that’s what we were there for! The party was AMAZING! The atmosphere was electric and I don’t think I could possibly put the night into words.

We had booked our taxi to come back at 2a.m. and the closer it got to that time, the more fun we were having…we never made the taxi! It then got the a stage where it started getting brighter and you could further and further up the beach…. sunrise was on it’s way! As you can see, the beach was still packed and many people sat down to take the sunrise in at 7a.m. that morning.

After we watched the sunrise, we decided it was time to go and rather than go back to our hotel by car, we opted for the taxi boat…what a great choice that was! We went all the way around the island and got to sit back and enjoy the view. It is simply a beautiful island! 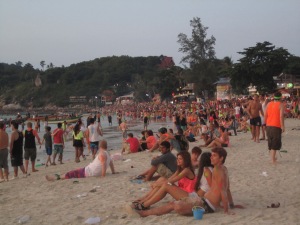 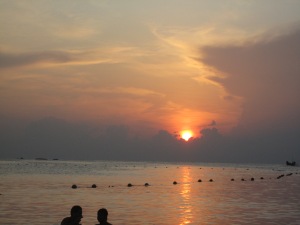 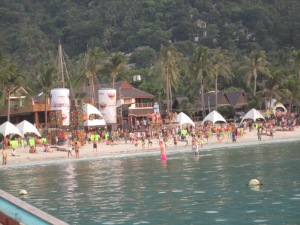 The next day..we didn’t do very much. It was our last full day on the island so we decided to relax and enjoy our last day. From here on in, our trip was going to move very quickly as we hadn’t planned to stay anywhere longer than three days.

The following day, we packed up and waited for our taxi to take us back to the ferry terminal…next stop Koh Tao!