When walking down Chapel St., I seem to find another unexplored café or bar. While Journeyman is not new to Windsor, I have only recently visited for the first time.

I met Ms. DeG for a late brunch and she suggested Journeyman as she has been previously. She got the ‘I hope this isn’t going to be a place I can’t order bacon’ look and said, it’s not vegetarian!

The noisy atmosphere is quite overwhelming on arrival but we were quickly distracted by our bubbly waiter who led us to a table. I’m not a huge fan of how close we were sitting to the other table, I could hear their whole conversation while I was trying to zone out and concentrate on my conversation with Ms. DeG.

Anywho, there is no bigger distraction than an epic menu that doesn’t allow an easy decision on what you want to order. I was torn between the Beetroot Cured Salmon ($21) and the Persian Fetta Potato Croquette ($19). The Cured Salmon sounded amazing but I thought I might not be hungry enough for it and decided to go with the Potato Croquette. Ms. DeG asked our waitress for a recommendation as she had previously had the Smashed Avocado ($19) and wanted to try something different. She decided on the Avocado Hummus Toast ($19). We each ordered a Long Black for our coffee kick.

Coffee arrived quickly, very tasty! I was a big fan of the blend but it could have been a little hotter.

Breakfast arrived together, always a big tick in my books! Ms. DeG’s plate was visually appealing with the contrast of the candied bacon resting on the seed covered poached eggs.  It’s been quite some time since I have had candied bacon on a dish and it was delicious! Ms. DeG enjoyed every element of this dish, and while there wasn’t much avocado on the dish, there was enough to tie the dish together. In saying that, the heroes of the dish were the candied bacon and the hummus. I think it’s safe to say Ms. DeG would happily order the dish again.

Moving swiftly onwards; I liked parts of my dish and the only element I didn’t enjoy was down to personal taste. To get it out of the way, I didn’t expect there to be corn on the dish as the description described it as puree (which I am ok with) and I know that is extremely picky but I hate having to pick it out of my dish, I am a very literal type of gal! That aside, the potato croquette was probably the lightest and fluffiest croquette I have ever tasted, but, a little bit of seasoning wouldn’t have went astray. My two poached eggs were perfect and I couldn’t get enough of the crunchy kale, it was delicious! The manchengo cheese was a nice addition to a nice dish overall, it just lacked a bit more flavour and punch. 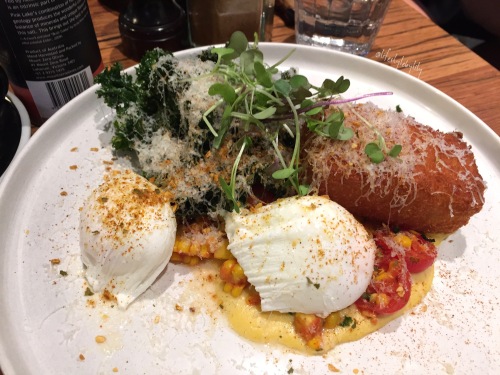 Nevertheless, I will most certainly return for another breakfast! Also in the area, I have visited; The Lucky Penny  which we weren’t a fan of and Hawker Hall for an evening catch up… both with Ms. DeG!